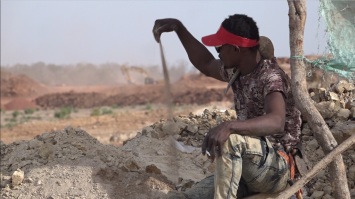 Ousmane Touré, generally known as « DJ », is a gold digger in Mali and dreams of a better life. He runs a small bar with his wife Ami at Baboto, near Didjian. Didjian is a mining town in western Mali that has been flourishing for 20 years thanks to Randgold, a multinational company that operates a large gold mine there.

Randgold’s presence has created a lot of jobs, but also jealousies, and sometimes conflicts between some villagers – who live fairly comfortably from the wealth derived from the mine – and some artisanal gold miners – who also live on the proceeds of gold, but digging at the risk of their lives.

Like many young Malians, DJ had the gold fever. He led a life of hard work and freedom dreaming of the gold vein that would allow him to manage his own nightclub. But like many others, he earns only a few grams of gold per month (about £50 to £75). Rich gold veins are rare, too rare. Ousmane no longer wants to earn gold, but money. He undertakes to get himself hired by Randgold in order to have a fixed salary, and thus improve the living conditions of his wife and three children….

« Rencontres d’août », Lussas Documentary Film Festival 2019
With the support of Un Monde Par Tous Foundation
With the participation of CNC & The French Institute in Mali (IFM)